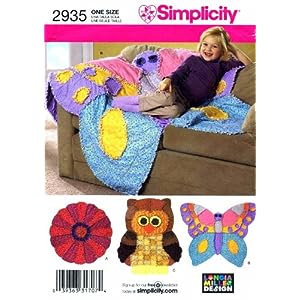 Here's my first piece of evidence I do more than just kids clothes!  This is a either going to be a birthday or Christmas present for Aviendha...I haven't decided which.  She chose the butterfly and helped choose the fabrics so it's a pretty funky butterfly!  She hasn't seen it yet, and doesn't even know I had been working on it (phew!)  This is SOOOOO easy.  BUT, I will tell you the things that will make this even faster/easier.

First:    If you don't have a heavy duty sewing machine I don't recommend getting the fleece padding that is completely optional to put between the flannel layers.  This will make sewing the pieces together difficult work for your sewing machine!  I didn't use it!

Second:    Before you pick out fabric, go over the pattern so that you know which fabrics will be used for what parts of the butterfly.  The easiest way to do this is to use a pencil/pen and write the number of the fabric in each section of the picture and then shop for it.  The picture on the the front of the pattern only uses 8 different colors instead of the 9 it suggests in the pattern so keep that in mind.

Third:  Don't cut the fabric out with right sides together since you're going to be flipping them around to having wrong sides together anyway.  Also the markings will be going on the right side so it's a waste of time to cut it out the way they say.

Fourth:  They suggest putting the circles on last which ABSOLUTELY stinks because of the bulk of the quilt and trying to sew in tight circles.  It's not worth doing those last.  Put them on before you sew the rest of the pieces together and you're life will be much easier.  The only thing is that you'll have to make sure you don't catch any edges when you are putting it together.

Last:  Back stitch all ends when you are sewing pieces together as this is a heavy blanket and just because it's a rag quilt doesn't mean you really want it falling apart =D

One extra tip:  When sewing the upper wings together it won't look like the pieces go together but that's because they need to make a curve.  So you need to do a little easing around and pinning, but they will fit nicely!

Here is the finished product (the picture doesn't do the colors justice!) 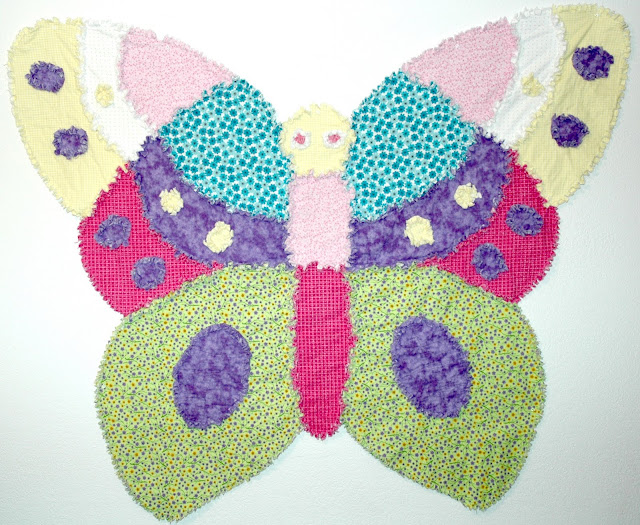 On my 1-10 scale I'm rating this a 3 because of the curves that some people might not be accustomed to working with.

Here I am starting another blog when I don't add much to my other one as it is. Ha! Anyhow, I do so many sewing projects that I decided this would be the best place to talk about them and give tips and advice should anyone ever try them! I also take suggestions from other people so if there's something you want to see done but are too chicken to try it, let me know! Once in a while I might put up a non-sewing project because those occasionally interest me. Sewing is becoming a lost skill so I'm hoping this blog will inspire and shed a less intimidating light on it. Questions are always welcome!
Sew, here goes nothing! (Ha, ha! Lame I know!)

~Always read through the instructions for a pattern before you buy/cut/sew anything!
~Know your measurements (or whoever you're sewing for) if it's clothing!
~If the fabric is cotton, pre-wash it before cutting to allow for shrinkage.
~Start with something easy!
~Tutorials on how to use your particular sewing machine, or how to do a sewing technique can be found all over the internet, especially YouTube!